United States and Borussia Dortmund midfielder Christian Pulisic is set to miss the next 3-4 weeks after tearing a muscle in his right thigh in Tuesday’s 1-1 friendly draw against Chile, a source tells ESPN.

Pulisic, 20, returned to Dortmund after leaving the pitch early in the match against Chile in which he became the youngest American to reach double-digit goals. 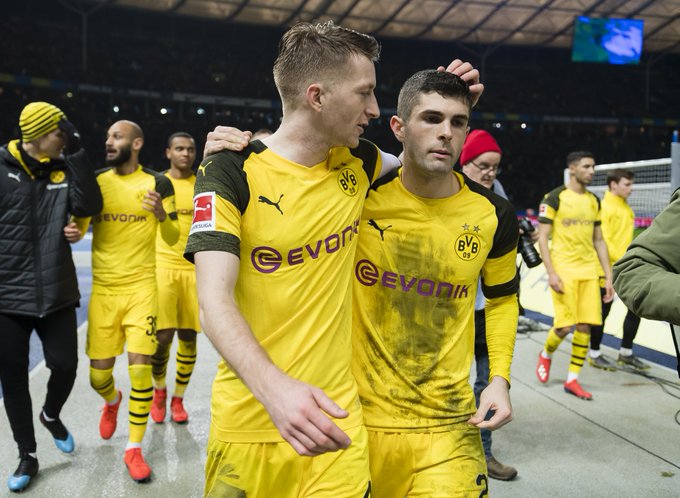 Favre presser ahead of #BVBWOB:

“The boys have come back fit from the international break. Only Pulisic, unfortunately, has returned with a pulled muscle in his leg.”

However, his record came at the cost of an injury which Dortmund coach confirmed to be a torn muscle fibre in his thigh.

“Christian Pulisic sadly is injured. He will definitely not play,” BVB coach Lucien Favre said ahead of Dortmund’s match against Wolfsburg on Saturday.

Favre did not comment on Pulisic’s chances of playing in the Klassiker against Bayern Munich on April 6 but a source says he’s set to be out for up to a month.

Pulisic has been limited to 15 league matches and 25 overall this season for Borussia Dortmund. He tore a calf muscle last October and a thigh muscle in February, and lost playing time because of the emergence of 19-year-old English winger Jadon Sancho.

He scored his 10th international goal and at 20 years, 189 days, broke the American mark for youngest to double-digit goals, set in October 2010 by Jozy Altidore at 20 years, 337 days.

Chelsea agreed in January to buy Pulisic from Dortmund for €64 million and loaned him back to the German club for the rest of the season.

Information from the Associated Press was used in this report.

Pogba, Hazard and Sane lead stars to watch in this summer...

Renault drop by Red Bull to be replace by Honda

The challenges players will face at US Open by Luke Donald

6 near major misses by Tiger Woods since US Open win...

WILLIAMS FOREVER: HOW VENUS AND SERENA CHANGED THE GAME FOR GOOD